2 miles of Wye Valley walk
82 hectares to explore
750 year old Yew trees
Piercefield woods are the gateway to the Lower Wye Valley, stretching for over 3km along the river from near Chepstow castle in the south to Wyndcliff woods and the Eagle’s Nest in the North.

Know before you go

The Wye valley walk is 136 miles long and begins in Chepstow. Chepstow Leisure Centre is a convenient place to begin this long distance walking trail with the first 2 miles going though Piercefield Woods.

The Wye Walley Walk through Piercefield Woods is a permissive right of access, this is muddy and steep in places. Please stick to the trail as there are extremely dangerous drops from cliff tops into the Wye Valley gorge below. There is no right of access into the rest of the woods due to the dangerous nature of the gorge and the tidal mudflats of the river below.

Piercefield Woods are a part of the Lower Wye Valley woodlands, one of the largest and most important areas for native woodland that remain in Britain and at 81ha they are also the largest Nature Reserve Gwent Wildlife Trust manages.

The varied geology of the site, with limestone underlying calcareous woodland with ash, Field Maple and rarer shrubs such as Wild Service tree, Wild Privet, Dogwood and a range of whitebeam species – some of which are only found in the lower Wye Valley. This grades into sandstone underlying acidic woodlands with oak, birch and rowan. The steep ravine woodlands contain both small and large leaved lime: beech woods; and also contain a very rare woodland type in the UK, Yew-dominated woods. Some of these Yews measure up to 5.5m in girth, making them approximately 750 years old, although there is great debate over how old our largest Yew trees are!

The plethora of tree species isn’t the only thing that testifies to the huge importance and diversity of these woodlands, the plant species list is long and includes Wild Daffodil, Lily of the Valley, Spurge Laurel, Stinking Hellebore and Herb Paris as well as carpets of more common species such as bluebells, wild garlic and Wood Anemone.

Previous planting and landscaping in the 1750s give rise to woodland giants - veteran and ancient trees in large number. Look out for twisted old Horse Chestnuts,  beech, limes and oaks as you wander along the Wye Valley walk. These ancient trees are a habitat in their own right and contain many very rare insect species such as Cosnard’s Net Winged Beetle, not currently recorded anywhere else in Wales and a lime bark bast beetle that, again is only recorded in Wales from the Piercefield/Wyndcliff woodlands.

The area is also very important for mammals including many rare bat species including lesser and greater horseshoe and thriving populations of Hazel Dormice and Yellow Necked Mice.

These ancient trees and woodland and the diversity contained within have earned it the highest status of European protection as a Special Area of Conservation (SAC).

The River Wye, mudflats, estuarine habitats and marshy grassland are another important feature of the site containing approx 7.5 ha of grassland with species such as Meadow Rue, Angelica and Water Dropwort. The river and tidal habitats contain species such as Sea Pearlwort, Sea Plantain, Sea Wormwood, Sea Milkwort, Sea Aster and Seaside Centaury. These habitats are a part of the River Wye Special area of conservation (SAC) making Piercefield Woods the only Gwent Wildlife Trust site to contain two of these topmost designations, a truly unique place!

What we do here

Nothing! Not exactly true but the aim at Piercefield is to enable natural woodland processes to develop and continue.

The steep gorge sides and the exposed nature of these lead to large amounts of tree falls which in turn either hit other trees creating fractures and natural pollards or create open glades all of which are ideal for wildlife such as bats to roost and feed. The large amount of veteran and ancient trees also lend themselves to this approach as they are very important habitats for all sorts of wildlife , particularly rare invertebrates so where possible these too will be left unmanaged.

This naturalistic approach to woodland management does require that visitors stick to the Wye Walley walk as other areas have fallen and damaged trees that could pose a danger to visitors if they stray off the paths. Gwent Wildlife Trust lead guided walks into these “out of bounds” areas so keep your eyes on our website for details.

Despite the naturalistic approach Gwent Wildlife Trust will be felling ash along the Wye Valley walk over the next few years due to ash dieback. It is hoped that this will create open glades along the path which will benefit woodland flowers and insects, particularly butterflies as well as make this long distance path safer for visitors. 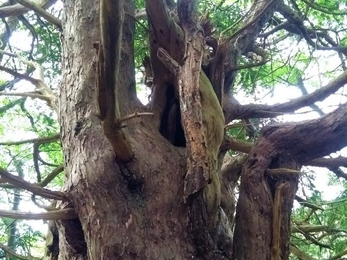 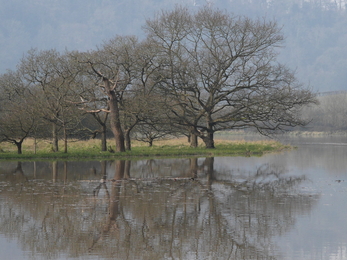 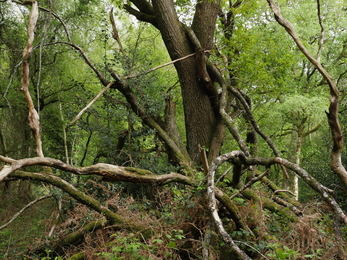 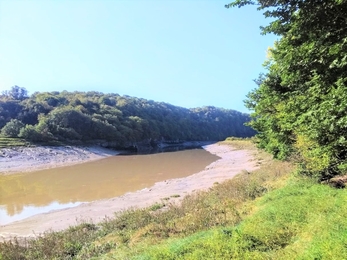 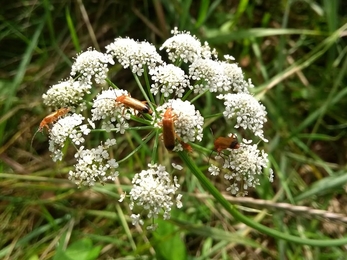 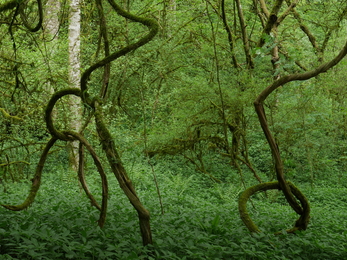 As if the wildlife value wasn’t of enough importance, the woods also contain 2 iron age hillforts, a medieval farmstead, roman trackways, and numerous viewpoints and features such as the grotto, the alcove and the giant’s cave, which are part of the 18th century picturesque movement. This was a concept which tried to accentuate the natural beauty of a place creating views that would be highly suited to paintings or to inspire poetry or music. These were a part of the tour of the Wye, and the Wye Valley is regarded as being the birthplace of modern tourism for these natural, yet manufactured views and features.

The viewpoints and the hillforts are protected as Scheduled Ancient Monuments (SAM) and the whole woodland and parkland beyond, including these features, are listed as a Grade 1 historic park and garden.