Gwent Wildlife Trust's protected nature reserve at Barecroft Common has been damaged by M4 survey work before a decision on the motorway has even been made.

Welsh Government contractors have caused ‘substantial’ damage to a nature reserve while carrying out survey work for the proposed new M4, before a decision has even been made about whether the motorway is going ahead.

Contractors using a specialist Unimog vehicle and carrying out site investigations for the proposed M4 route through the Barecroft Common section of Gwent Wildlife Trust’s Magor Marsh nature reserve, caused substantial damage to the Site of Special Scientific Interest (SSSI) after becoming stuck in the deep, peaty soils on November 30.

The vehicle was then left on the protected land over the weekend sinking even more, with further damage caused when a recovery truck, sent to rescue the Unimog also became stuck in the peat and a third bigger recovery vehicle had to be brought in, to rescue both the Unimog and the original recovery truck.

Barecroft Common is owned by Gwent Wildlife Trust and is subject to a Compulsory Purchase Order because Welsh Government want to build over the wetlands, which is home to rare wildlife such as otters, water voles and shrill carder bees.

The M4 motorway sub-contractors had been attempting to carry out geological ground survey work on the land, comprising of drilling, cone penetration and shear tests on behalf of Welsh Government, when they became stuck.

The overall M4 scheme contractor Costain had sub-contracted the work and had sought permission from Gwent Wildlife Trust prior to the work.

The charity gave their consent for access and in order to keep disruption work on the protected landscape to a minimum, had advised contractors about the unique wetland landscape’s challenging nature, which is very soft in places and completely floods during heavy rainfall.

GWT says that before the vehicles became stuck at Barecroft, contractors also got stuck two fields west of the reserve, when carrying out similar investigations on the Levels and had to be pulled out of the mud by a local farmer.

Barecroft Common is one of the many areas rich in wildlife, which is threatened by the hugely damaging 14 mile motorway route that would carve its way through four nationally protected areas and destroy huge parts of the largest wetland habitat left in Wales.

It is understood that geological ground surveys, such as those attempted at Barecroft Common, are being carried out at around 100 sites on the Levels, impacted by the proposed route of the new M4 motorway.

Gwent Wildlife Trusts’ Chief Executive Ian Rappel said: “This incident at Barecroft Common is almost a metaphor for Welsh Government’s disorganised and chaotic approach towards the M4 ‘Black Route’ – faced with the unfolding ecological, financial and social costs of this proposed scheme they have found themselves mired in controversy and bogged down in a political swamp!” 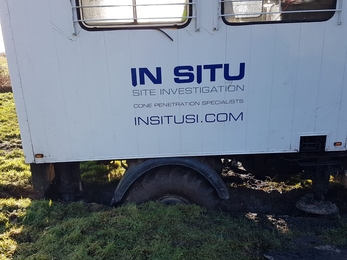 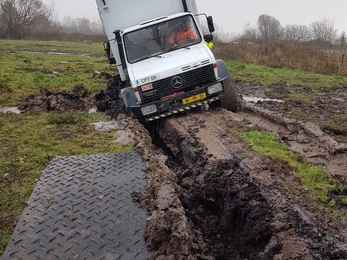 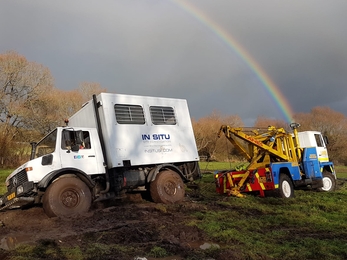 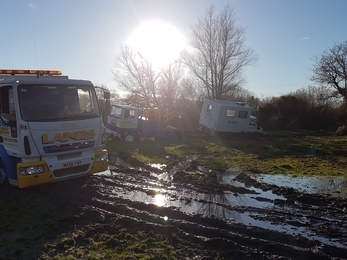