Save the Gwent Levels

For decades, Gwent Wildlife Trust has been working to restore, enhance and protect this vitally important landscape for wildlife and people, in the face of multiple threats from climate change to inappropriate development pressure. 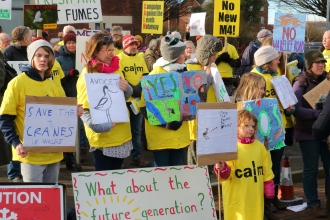 Our campaign against the M4 motorway

Gwent Wildlife Trust have welcomed the decision by Welsh Government Minister for Rural Affairs Lesley Griffiths, to refuse plans for a…

We're celebrating after reaching our fundraising target to buy land and create a new nature reserve on the Gwent Levels.

A landscape under threat

The Gwent Levels is home to an incredible diversity of wildlife. Gradual changes to the landscape followed by centuries of human's maintenance of the watercourses means that the Gwent Levels is now home to a rich abundance of fascinating and rare aquatic invertebrates (watery bugs) in the country.

The levels also support a wide variety of birds, particularly waders and waterfowl.  A number of European protected species and UK protected species have been confirmed to be present, including dormice, grass snake, some bat species, otter, great crested newt and water vole. The charismatic water voles had become locally extinct from the Levels but are now increasing thanks to our reintroduction programme.